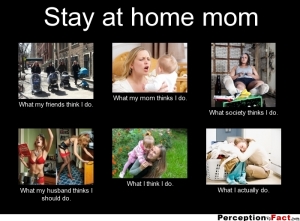 I’m not sure why I have to write this,

I don’t even know why or how this can still be a thing.

But I recently saw a comment regarding this topic on Facebook, so I guess it is, so here we go.

Let’s just clear this up right now: being a stay at home mom IS a job. According to Merriam-Webster, a job is:

Did you catch that?  Or did you just skim over it?  NOWHERE in the description does it say “only paid positions”.  It DOES say “remunerative” (meaning financially rewarding or lucrative), but it doesn’t say ONLY those jobs.  Actually, though, it also says “an undertaking requiring unusual exertion”, and if THAT doesn’t have “parenthood” written all over it,then I don’t know WHAT does.

Now, I get that many people ARE willing to admit that being a Stay At Home mom IS a job, but now that we’ve made sure to establish that, I want to address the latest conversation I saw on Facebook on the “worth of a stay at home mom.”  Someone chose to go off on one of those videos that gives a run down on what SAHMs do, what each of those jobs would cost, and then gives a grand total of what a SAHM would be paid in a perfect world.  This person took offense to that figure- apparently they get paid less than that “imaginary perfect world” number, and they needed to spout off their dissatisfaction at the ludicrousy of even the mere THOUGHT of a stay at home mom getting paid for each of the jobs they do every.  single.  day. 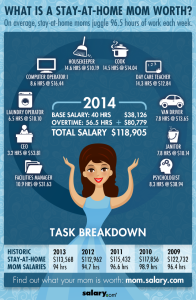 But can I ask you a question?

Why would ANYone get offended at giving a WORTH to someone?  Why is it SO horrible to look at ALL that a stay at home does; take into account what it would cost for someone ELSE to do those jobs; and give a grand total?  To my knowledge, this video NEVER said that 1 job is harder or more important than the other.  Neither was it a call to action for all SAHMs to go on a strike (EQUAL PAY FOR EQUAL WORK!).

Nope.  All that video was doing was giving stay at home moms, like myself, that sometimes get depressed, think their job isn’t important or that they’re failures or that they aren’t contributing to society -or their families- at all, and they’re saying,”See?  You’re worth WAY more than you give yourself credit for,”

I ask you- is that bad?  Does putting a worth on the job of a stay at home mom cause YOUR boss to say,”Well, this has made me see that I’m paying you WAY too much”?

Trust me when I tell you that I KNOW there’s envy and difficulties on both sides.  I’ve been the mom who had to drop my kiddo off at daycare, worked a full shift (sometimes overtime), cried that I was a horrible mom for leaving my child, picked my kiddo up, and then had to put on the “mommy hat”- and it was HARD.  All of it.  And now I’m the stay at home mom who can’t even hide in the bathroom, and tries to talk the ear off solicitors at the door just to have some adult conversation, and cries because she worries that she made all the wrong choices that day.  Its ALL hard.

I’ll never say that 1 job is harder or easier than the other.  Every job has its perks, and every job has its pitfalls.  My perk is that I get to be around my kids all day, every day.  Unfortunately, that’s also a pitfall.

Another thing, if someone STILL thinks that putting a worth on my job is stupid-

Do you ever say to yourself,”I’m worth more than they’re paying me”?  Have you ever demanded a raise?  Have you ever gone through  a performance review and gotten less than you thought you should have for the job you do?  How about this- do you ever scoff at foreigners that get paid in a different currency?

I know I don’t receive a paycheck.  By society’s standards, I’m broke, but this job I’m doing allows my family to be what it is.  Its not worthless just because my paychecks don’t get deposited in the bank.  I get paid in kisses, hugs, messy-handed high fives, pictures of dragons, rocks, bugs, and dandelions.  No, I couldn’t exchange any of that at the bank for cash, but the money we DON’T spend on a cleaning service, fast food, a chef, ride service, nanny, day care, etc., can certainly be pulled from our account and spent on other things we need.

One last thought before you go on about your day: giving my job worth doesn’t diminish yours.

Now, go be nice to each other.  We’ve all got it hard.

I write and drink coffee to save lives. You're welcome, humanity.